Menu
No products in the basket.
0€ Basket
Retour

Do you like grandiose landscapes and charming villages? Great wines and exceptional terroirs? The names Vougeot, Puligny Montrachet or Côte de Nuits tickle your ears and tantalize your taste buds?

Come: we will take you on the Burgundy wine routes!

There are several routes that will take you from Dijon to Mâcon. By car, on foot or by bicycle, you will first take the Route des Grands Crus, better known as the “Champs-Elysées de la Bourgogne”. Then extend the discovery by the Tourist Route of Great Wines then by the Wine Route of Mâconnais-Beaujolais. If you are in an adventurous mood: take a detour via the Pouilly-Sancerre Route which will lead you, along the Loire, to the gates of Berry. 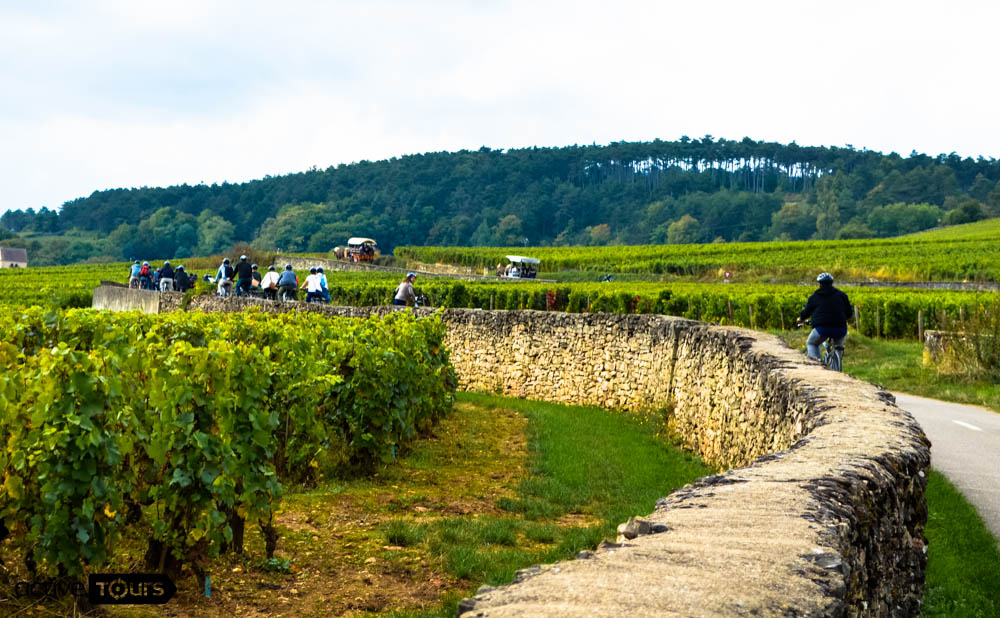 What a nice starting point the city of Dijon. It’s hard to resist the charm of half-timbered houses, mansions and medieval streets listed as Unesco heritage. To learn more about their history, follow the owl route set up by the tourist office. With a booklet or your smartphone, you will go back in time in 22 steps through the city.

Before you take on the vines, take a 360 ° look at the landscape as you climb to the top of the Philippe Le Bon Tower, the former astronomical observatory in the capital of Burgundy.

Are you looking forward to getting closer to the vineyard? We will meet you at your hotel to provide you with bikes and explanations on your route 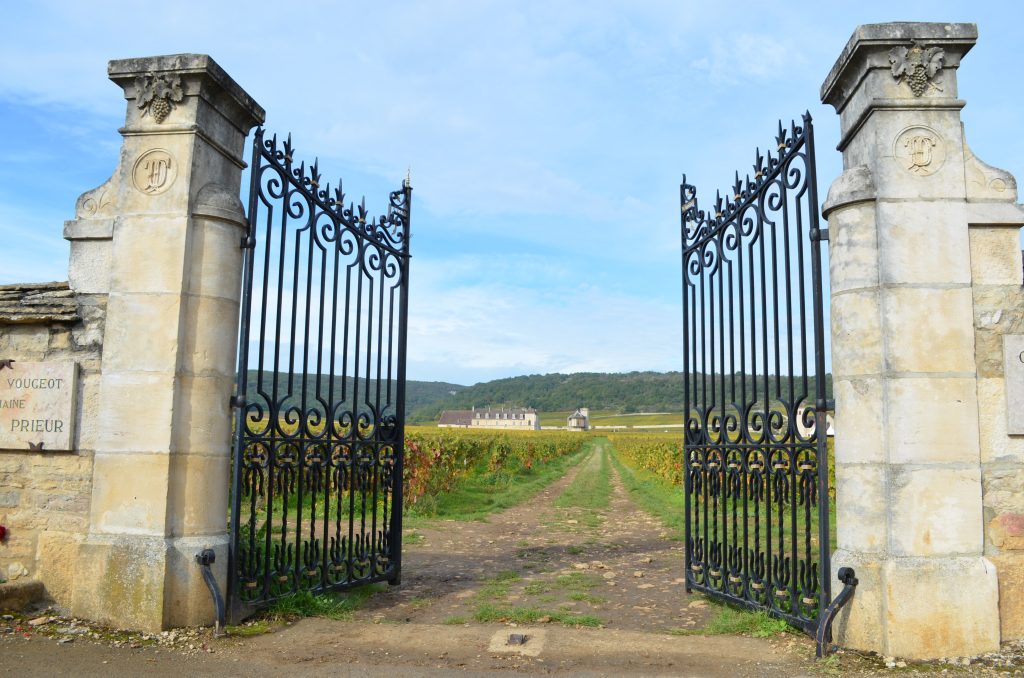 In a few minutes, you are in the middle of the vineyards. And what vines! You enter the Gevrey-Chambertin appellation, the most important of the Pinot Noir regions, the Côte de Nuits. Over the kilometers, you dive into the heart of the wines of Vosne-Romanée, Fixin, Chambertin-clos-de-Bèze, Flagey-Echézeaux, Richebourg and, of course, Vougeot.

This part is unavoidable. 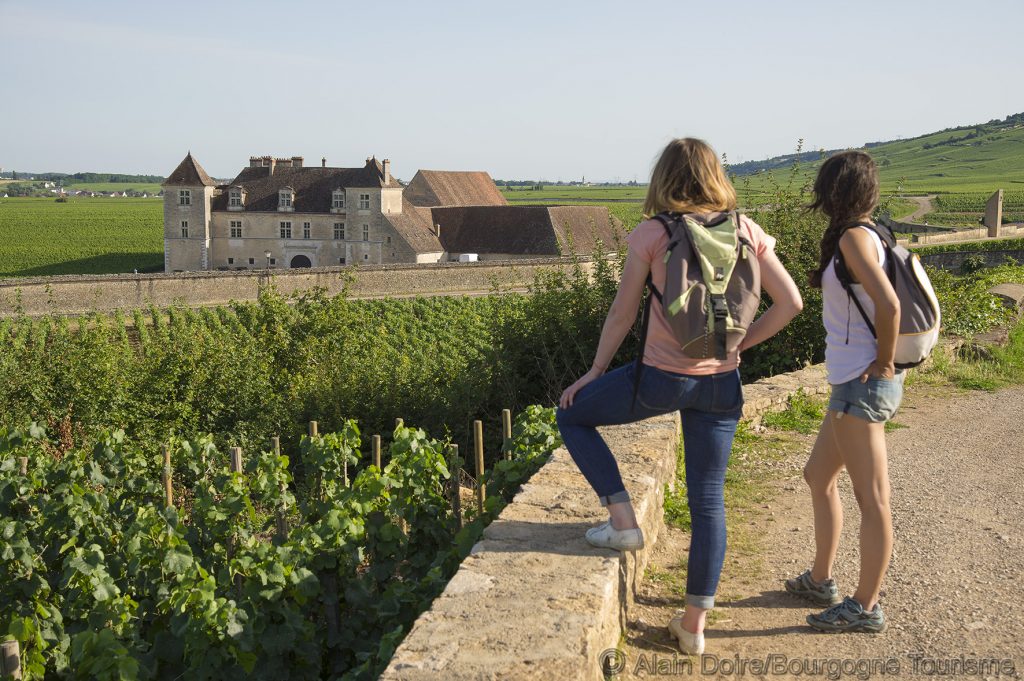 Majestic, the Clos de Vougeot castle owes its existence to the monks of Cîteaux. In the 12th century, they built buildings there to exploit the vine. Since 1944, wine has not been produced there, but a fascinating history has been cultivated there. The visit will take you in particular to the cellar of the 12th century, the fermenting room and the immense medieval presses.

Good deal: if you do not opt ​​for a guided tour, know that the castle has set up interactive terminals that allow you to discover the place at your own pace and in the language of your choice (the explanations are available in 10 languages!) 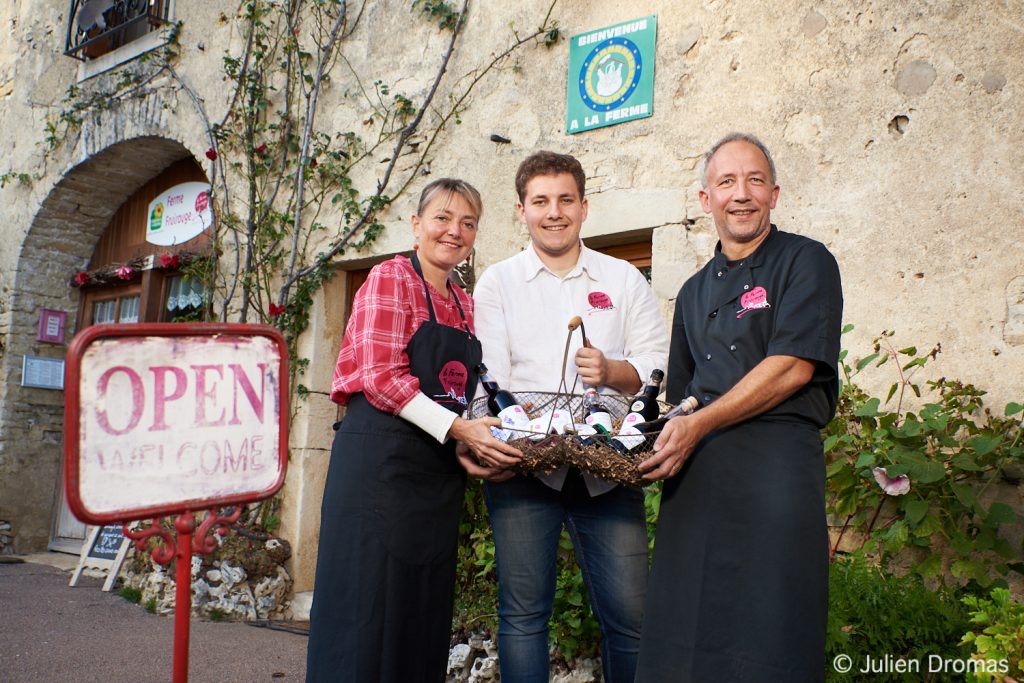 3 km from the Château de Clos de Vougeot, near the Romanée-Conti vineyard, do not hesitate to take a detour through the village of Concoeur and Corgoin. You will discover a nugget there: the Fruirouge farm. For four generations, the Olivier family has grown delicious, locally-processed fruit there. In season, you may have the chance to visit the blackcurrant fields of Burgundy and other red fruits that will make your mouth water. Nevertheless: at the store, you will have something to enjoy and make surprising purchases such as blackcurrant ketchup, this Vod’K6 or even floral water renowned for its benefits against rheumatism. 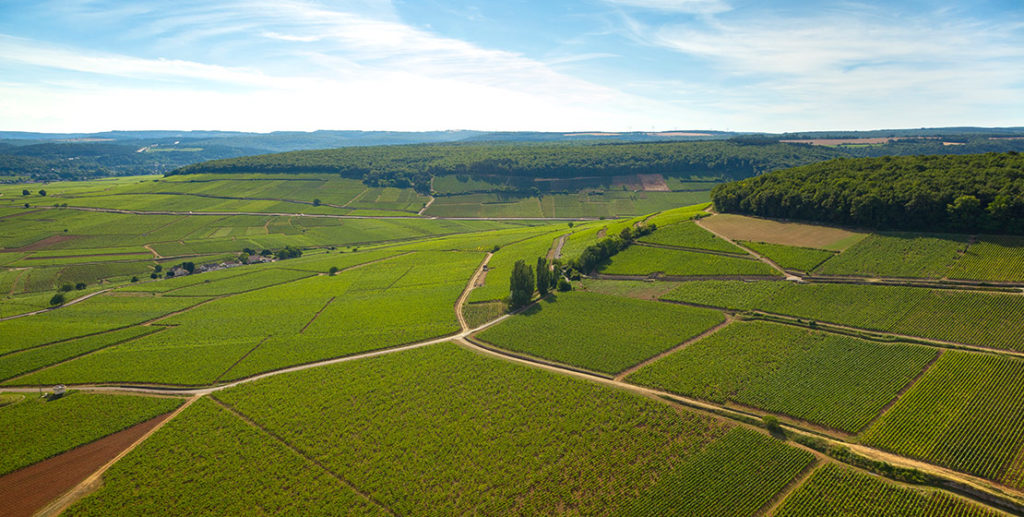 For the pleasure of the eyes and the taste buds
From blackcurrant to fruit of the vine, there is only one step. It is time to resume the wine route towards Nuits-Saint-Georges. Has the evocation of these good products made you hungry? A little before your destination, succumb to a stop at la Toute Petite Auberge de Vosne-Romanée. You will taste the delicious and succulent Burgundy snails or a lamb shank confit that has been cooked for four hours in its Hautes-Côtes honey juice. All while dipping your lips in an exceptional glass of Vosne-Romanée! 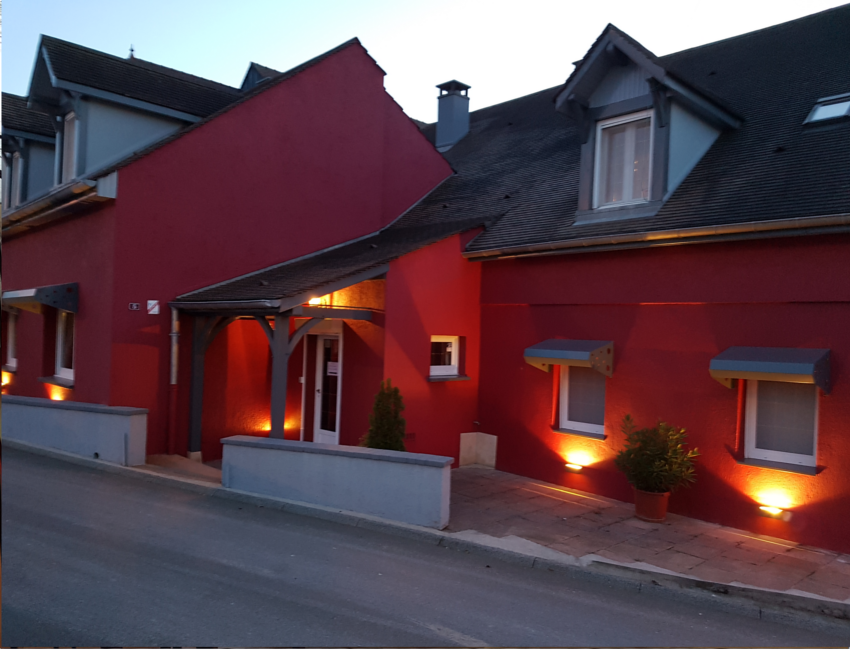 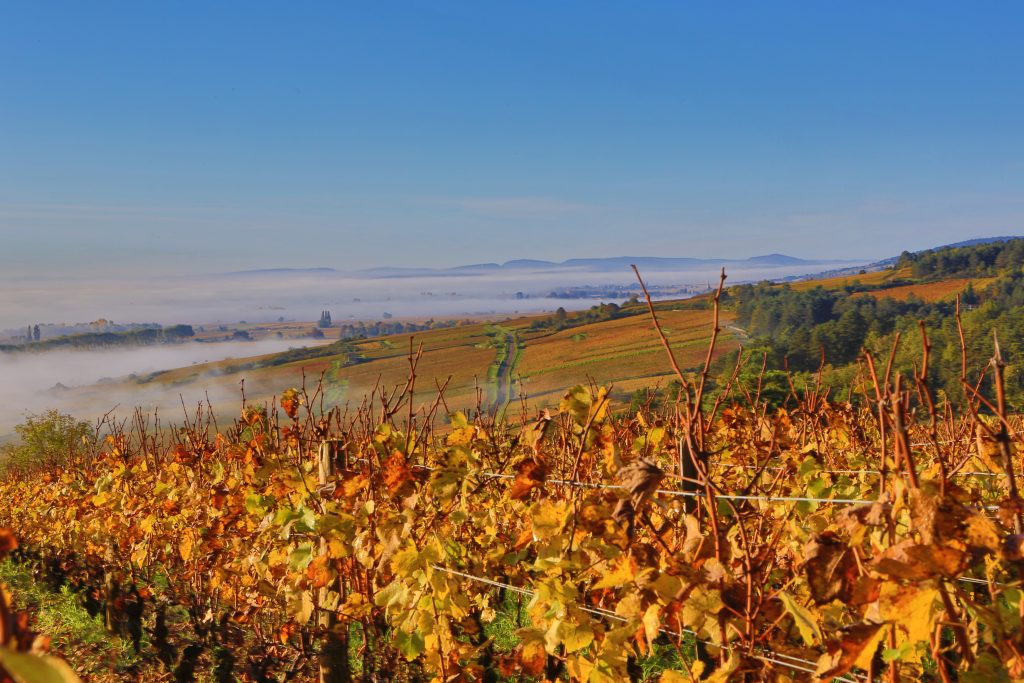 Since you are in Vosne-Romanée, impossible to zap the ride along the vineyards of Romanée-Conti. They are north of the village, behind the church. If this name rings a bell, it’s probably because this wine – considered the most expensive in the world – regularly breaks records in auction rooms. In October 2018, a 1945 vintage sold for $ 558,000 at auction in New York! If you do not have enough in your pocket to buy a vintage at the property, admire the panorama: it is magnificent and free!

Whether you are traveling the Grands Crus route with adults or with children, treat yourself to an entertaining and informative stopover at Nuits Saint-Georges. The imaginarium offers two tours, crowned with a tasting, which will allow you, through a sound and light show or interactive activities, to unravel the mysteries of Burgundy wines.
While I think of it, do not miss the opportunity to discover the largest wine store in Burgundy in this modern space! 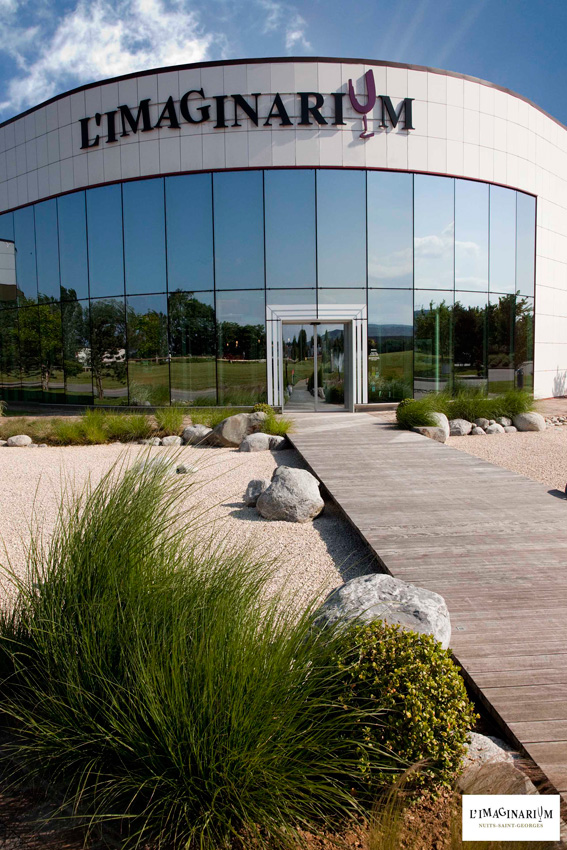 We leave the pinot noir paradise for the attractive Côte de Beaune and its flourishing vines. From the very start, your gaze will be captivated by the hill of Corton. At its feet lie the vineyards of the unique red grand cru of the Côte de Beaune, the Corton and the unique white grand cru, the Corton Charlemagne. History has it that the flowered beard emperor owned a few vines there. 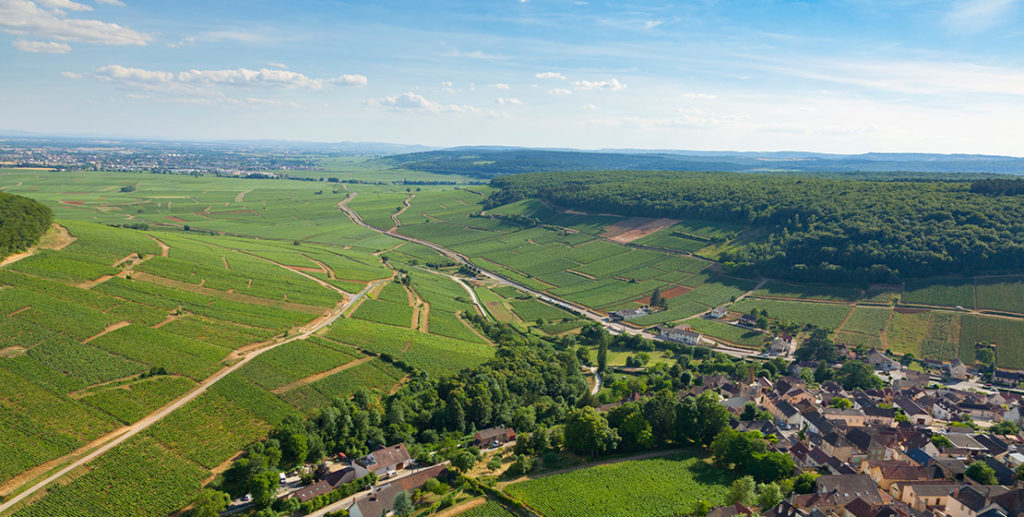 How about another little detour? (It’s so hard to resist the urge to see it all …) Here are three good reasons to go to Echevronne, about ten minutes from Pernand-Vergelesses. Domaine Lucien Jacob is waiting for you. Here, the wines are the fruit of reasoned viticulture and traditional and meticulous vinification. In this region, the Jacob family also grows fruit shrubs, the production of which is transformed into liqueur (blackcurrant, raspberry, blackberry). Finally, Jean-Michel Jacob will reveal another of his talents. Under his fingers, the wood of the barrels in which he has aged his best wines comes back to life, in the form of a sculpture. 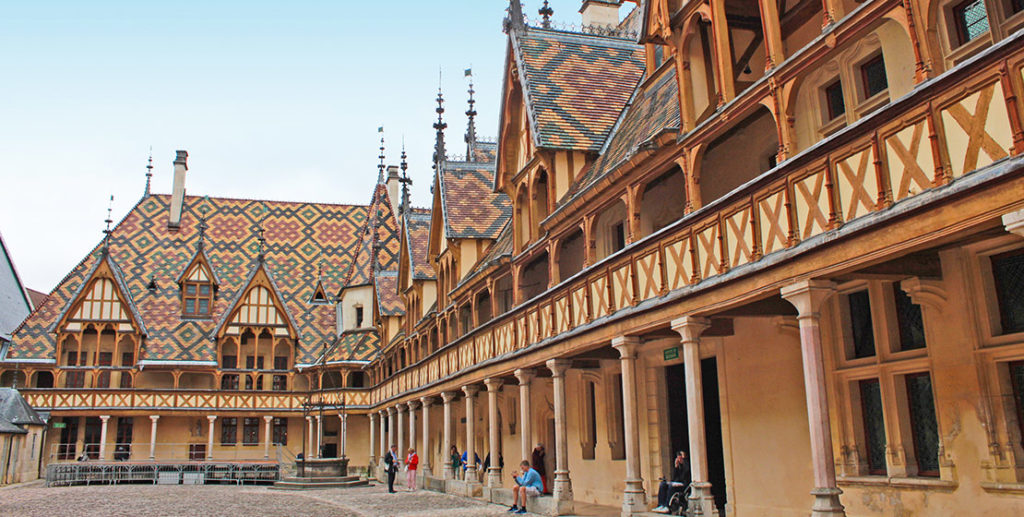 Here you are at the gates of Beaune, the historic capital of Burgundy wines. The city is home to one of the most prestigious historic monuments in France: its Hospices built in the 15th century. Today famous for the annual auction of wines from its prestigious estate, the Hôtel-Dieu was originally a palace for the poor. Richly covered with polychrome roofs, the place is as dazzling outside as inside. Be amazed by the boat hull vault of the Poor’s room, the majesty of the inner courtyard, the Gothic chimneys of the kitchen and the atmosphere of the apothecary.

Has this visit encouraged your appetite? How about buying something to snack on? Place Carnot, the Hess cheese dairy lovingly selects refined local cheeses that you will only have to pair with a local wine … 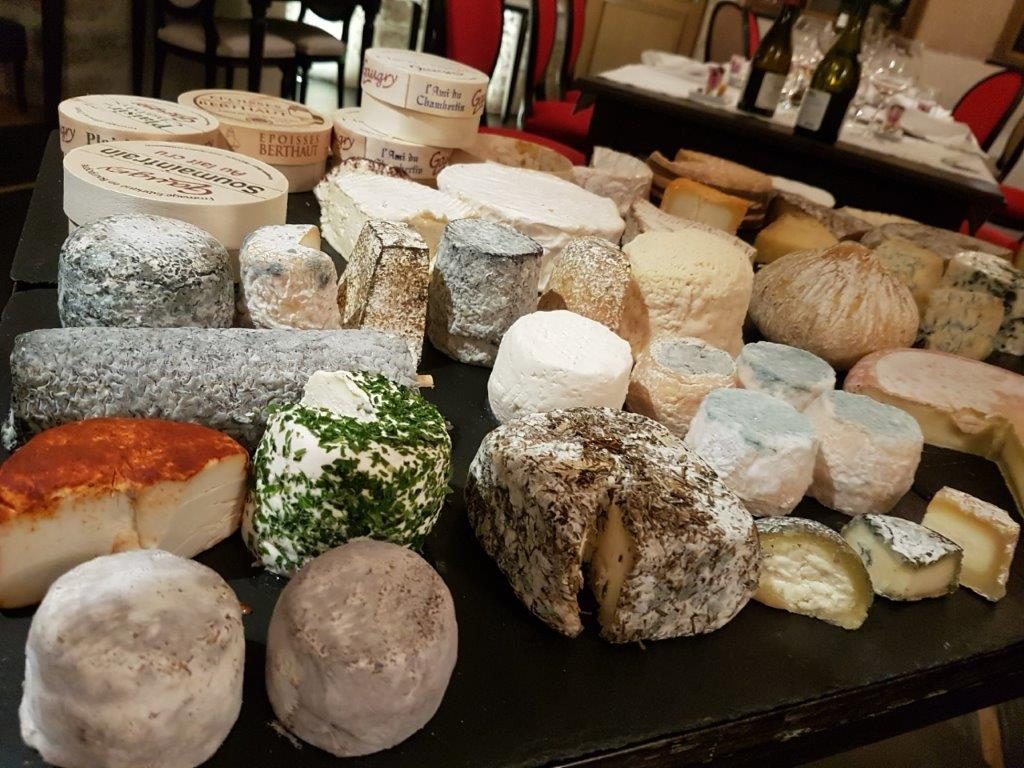 Another must-see “monument” in Beaune, the last independent and family mustard in Burgundy. At Fallot, you taste the mustards with a teaspoon at the store (and it’s a treat!) And you drink in the words of the passionate guides who introduce you to the house museum. Don’t miss out on the pretext that you don’t like mustard: you may well have a revelation! 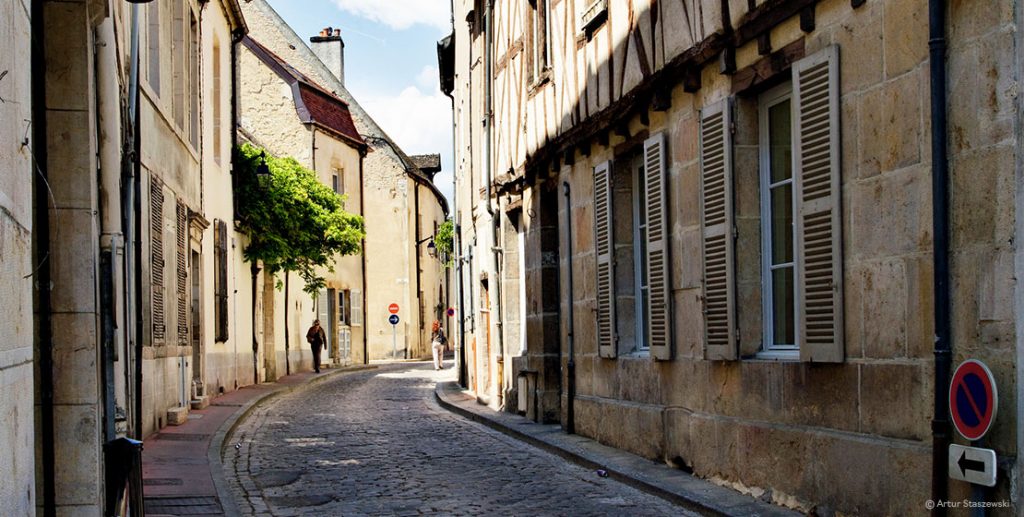 Do not leave Beaune without a stroll through the streets of the city, between small squares and sunny terraces.

Is the camera always at hand? We advise you a step which is likely to subjugate you. Pommard Castle has a motto: “fall in love with life”. In the environment of this three hundred year old domain, you will see that it is not difficult. Here, the tastings are conducted by sommeliers and professionals trained by the Wine & Spirit Education Trust. And while adults learn to taste wine like professionals, the youngest are also entitled to a discovery tour and a tasting… of organic fruit syrups. 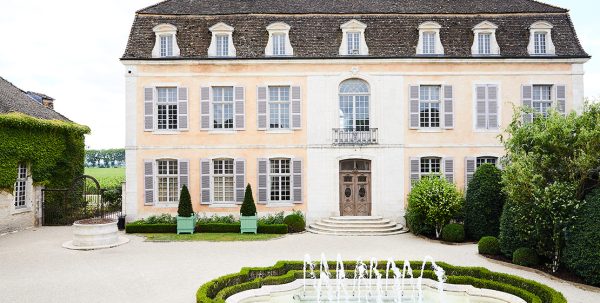 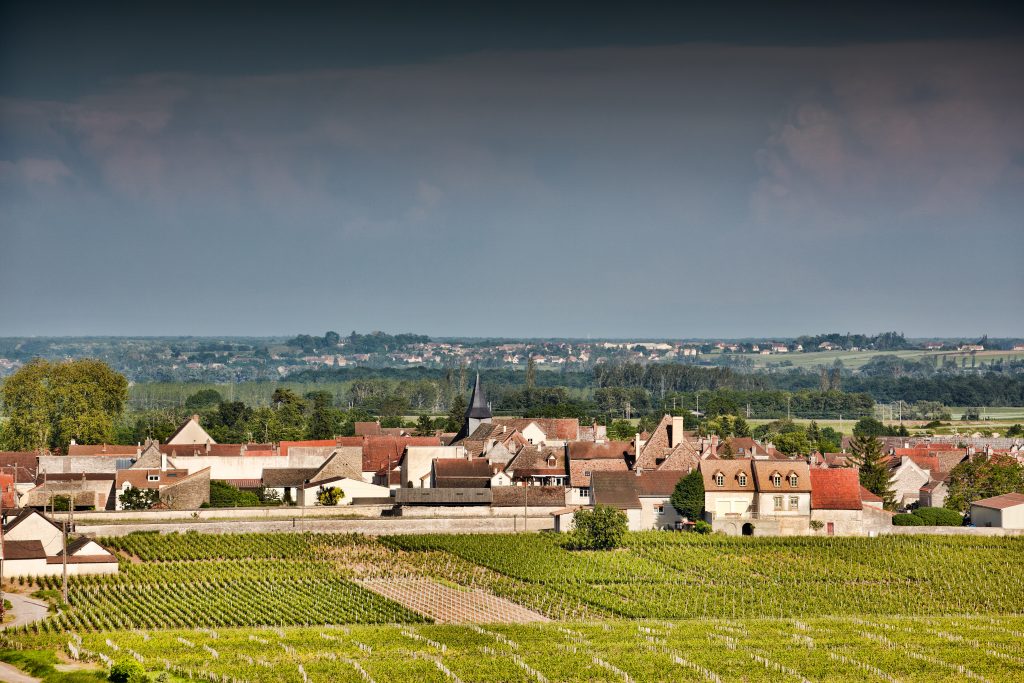 Leaving Beaune towards Meursault, observe the vine and its grapes. Do you see the color change? After Pommard, this is the kingdom of Chardonnay: these pale golden grains that give aromatic and elegant white wines.

Between Pommard, Volnay and Ladoix, stock up on Pinot Noir before moving on to the Chardonnays which reign supreme in Meursault in Santenay, passing through legendary appellations such as Puligny and Chassagne-Montrachet. 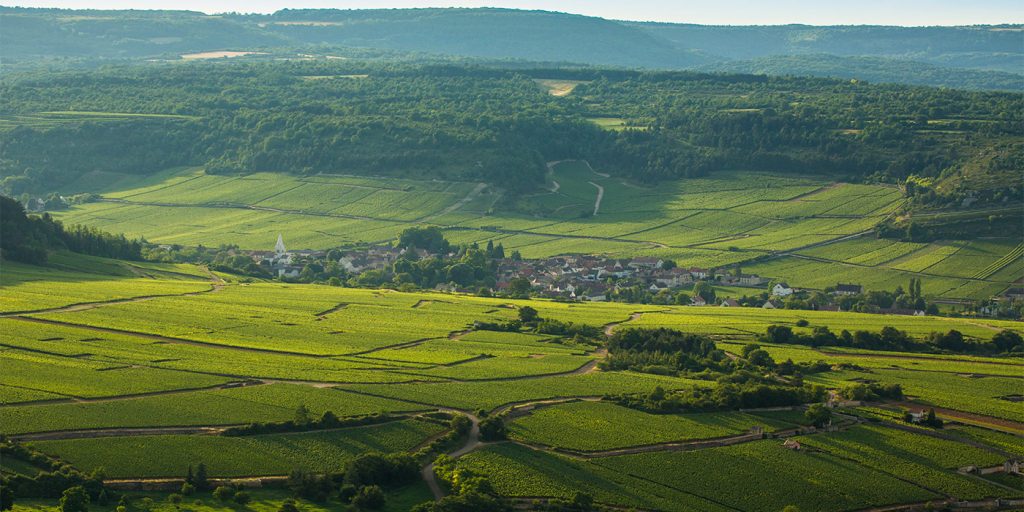 In Meursault, two routes are available to you.

1 – Turning towards Auxey-Duresses, the wooded massif shades the vines. Continue your journey towards the village of Saint-Romain to discover a surprising landscape: white cliffs stand behind the trees. 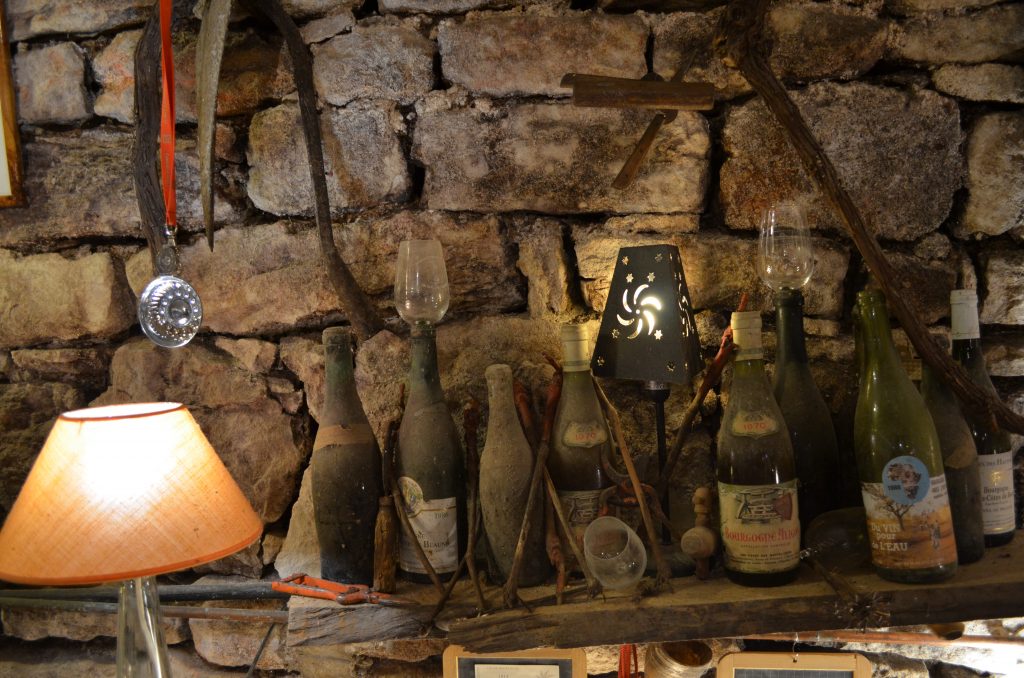 A few kilometers from Saint-Romain, make a detour to the village of Orches. Blandine and François Rocault welcome you to their wine estate. To say that they are passionate about their land is far from the truth! It’s simple: the family has been growing vines for 17 generations! Add to that a soul of artists: François is “winegrower-poet” and his son Lucien, “viti-sculptor”. With them, you can therefore rejoice both the body and the spirit. Their five guest rooms promise you a pleasant stay in Burgundy.

How about we take you to the end of the world? Rest assured: it is not far! In ten kilometers, you are there. In Cormot-Vauchignon, near the village of Nolay, surrounded by nature, you will not believe your eyes. A circus of limestone cliffs opens before you. And in the middle (if there is water) flows a waterfall. This site offers a beautiful marked hike which will allow you to say: the end of the world is not so far, I have reached it!

2 – From Meursault, continue your route on the D1138. It will lead you straight to the most southern Grands Crus of Burgundy. The biggest dry white wine in the world is born on this rocky land. Do you know where its name comes from? In the Middle Ages, a mountain “rachet” designated a hill on which grew only a thin vegetation. From now on, this terroir has its letters of nobility since it has five grands crus: Montrachet, Bâtard-Montrachet, Criots-Batard-Montrachet, Bienvenues-Bâtard-Montrachet and Chevalier-Montrachet. 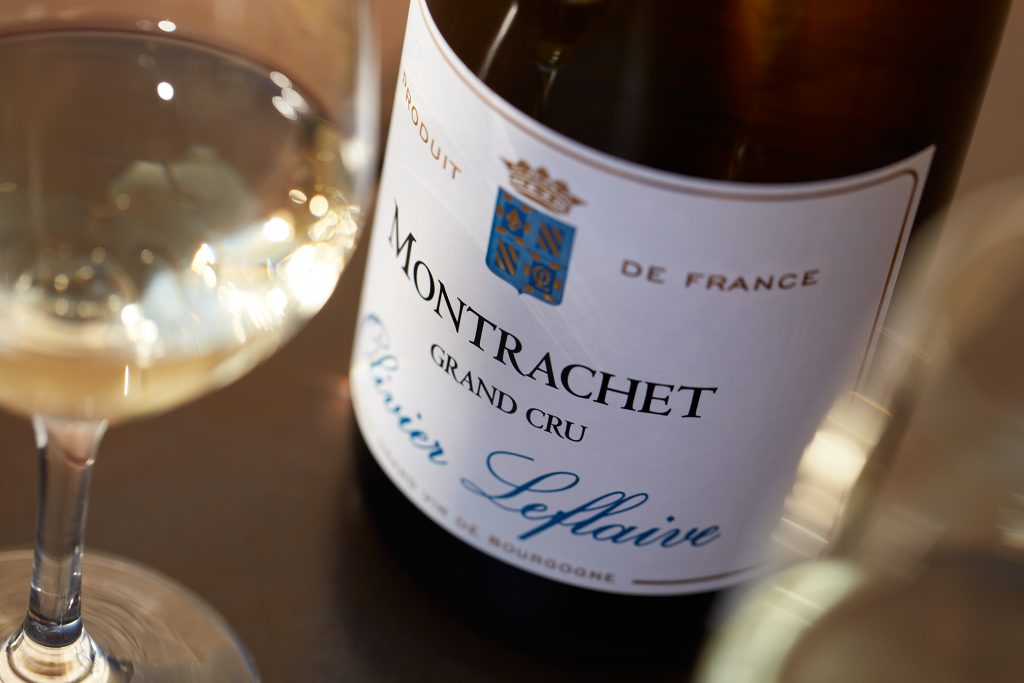 Open the door of Maison Olivier Leflaive in Puligny-Montrachet. Head to the Table and savor a rare moment. Through a unique menu, all of Burgundy flatters your palate. These simple but high-quality products that we have already mentioned (Fallot mustard, ripened cheese from Hess) are sublimated. 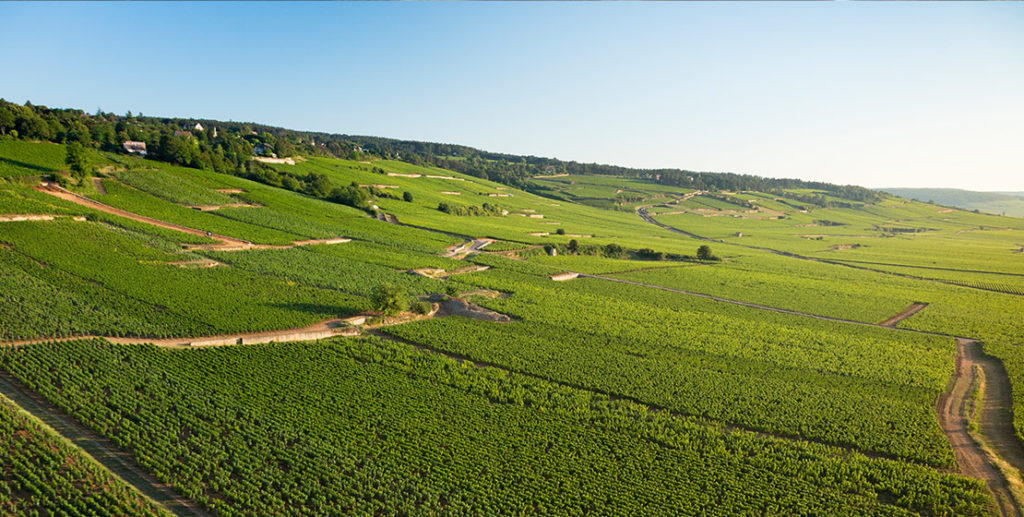 At the very south of the Côte de Beaune, the Grands Crus route ends with… a thermal spa. Fed by a natural source, Santenay combines water and wine (without mixing them!). A beautiful church, castles, a casino and a windmill in the middle of the vineyards complete the picture of this village located at the crossroads of the Beaune-Santenay cycle route and the greenway to Nolay.

We tell you a secret !

Between Puligny-Montrachet and Santenay, take a detour through the village of Corpeau. At the Auberge du Vieux vigneron, Jean-Charles Fagot will welcome you personally and offer you a good Burgundian menu accompanied by a selection of wines from his estate. You can trust him, he knows what he’s talking about: he has been making wine for three generations. 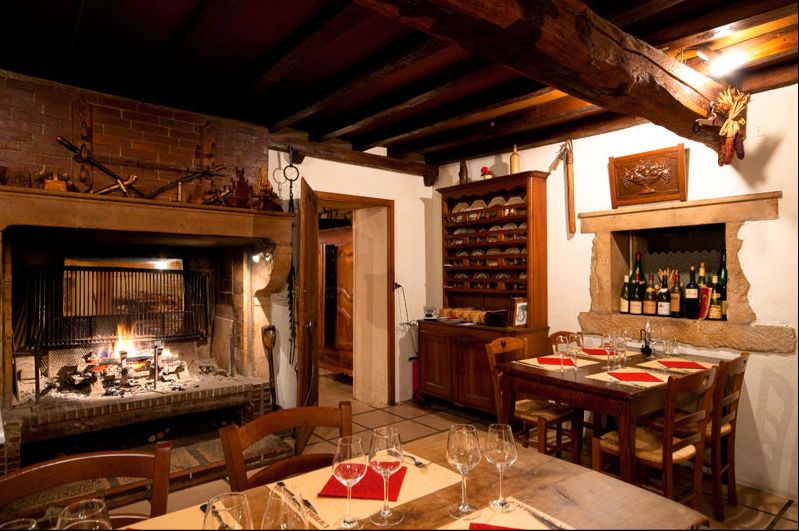 You have no desire to stop on such a good path? Burgundy is far from having revealed all its secrets to you! 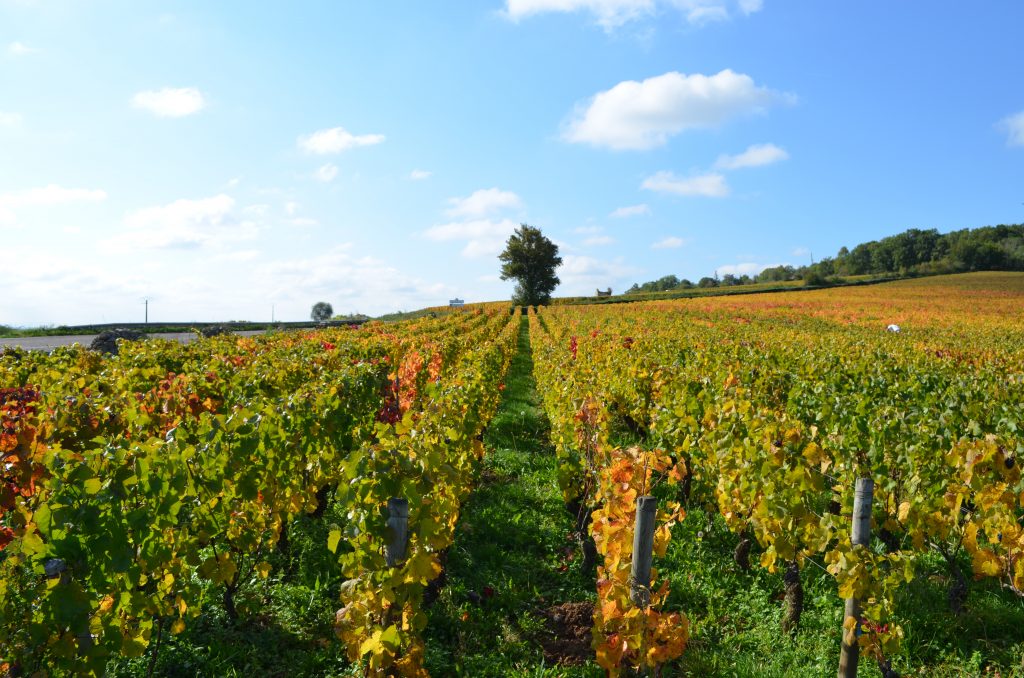 What to do in Burgundy?

Tips & recommendations for
your stay in Burgundy.